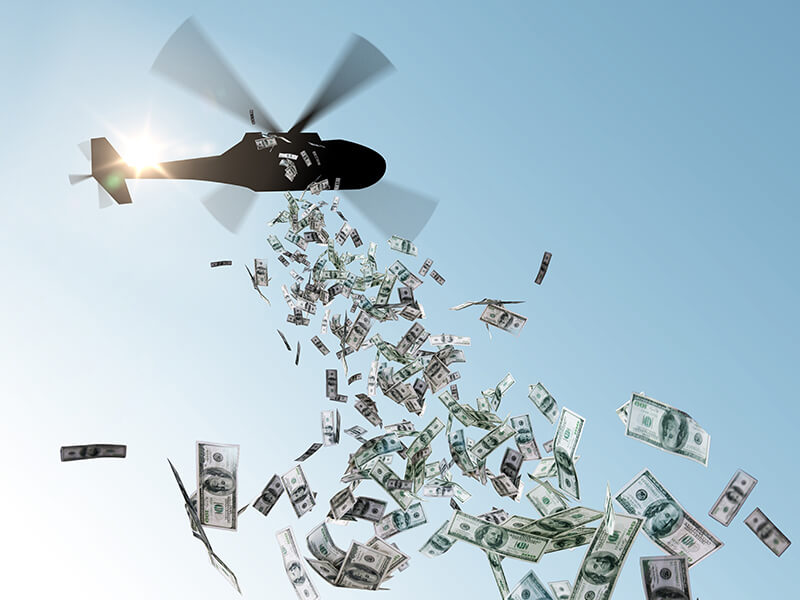 What QE Is and How it Works

Designed to encourage lending and spur economic growth, quantitative easing (QE) consists of an injection of cash into a country's economy.

Governments have traditionally implemented a QE approach through central banks when conventional economic policies have proved ineffective. The idea is that the central banks make purchases of financial assets from commercial and private institutions in order to create money. A predetermined amount of this money can subsequently be released into the economy. This, in turn, helps to boost the banks' excess reserves, raising the prices of the purchased assets and lowering their yield in the process.

In normal circumstances, central banks such as the US Federal Reserve purchase different types of bonds to bring down interest rates while increasing the quantity of money in the system. With QE, however, interest rates cannot be further decreased as they are already at 0 percent. This means the only thing that can be controlled or eased is the amount of money entering the economy – hence the name quantitative easing.

The first attempt to initiate a QE policy occurred when the government of Japan instructed the Bank of Japan to pump funds into the economy, beginning in 2001. However, since then, the continuing adherence to a QE policy in Japan has been deemed ineffective, serving as a warning for the United States and Europe.

With the UK facing recession in 2009, the Bank of England (BoE) implemented its own QE programme. Dropping interest rates to 0.5%., the BoE bought around £200 billion in assets through open market operations (OMO). This figure represented a whopping 14% of British GDP that year. In August 2016, the BoE announced an additional £60bn of government bonds and £10 billion of corporate bonds, to address Brexit fears. Most recently, a further £200bn purchase of government bonds was implemented at an emergency Covid-19 meeting.

Several well-known instances of QE serve as case studies for the policy. The most high-profile case in recent years has been the various stages of QE that began in the United States following the subprime mortgage crisis in 2008. During the initial phase (QE1), the Fed launched a bailout of publicly traded corporations and government agencies such as Freddie Mac and Sallie Mae. It also purchased private mortgage-backed securities available in the market. Due to the high risk associated with such securities, there was no market for them, so the Fed stepped in, supposedly helping to avert economic catastrophe.

The QE2 followed in 2010, as the Fed used funds from the 2008 investments plus extra public money to buy Treasury securities. The aim here was stabilize government finances. Between 2012-15, a similar initiative was launched, which was dubbed QE infinity because of the lengthy nature. As of 2019, a fourth round of QE commenced and on March 15, 2020, the Fed announced approximately US$700 billion in asset purchases to support liquidity during the Covid-19 crisis. An additional US$2 trillion in assets has recorded on the Fed books as a result.